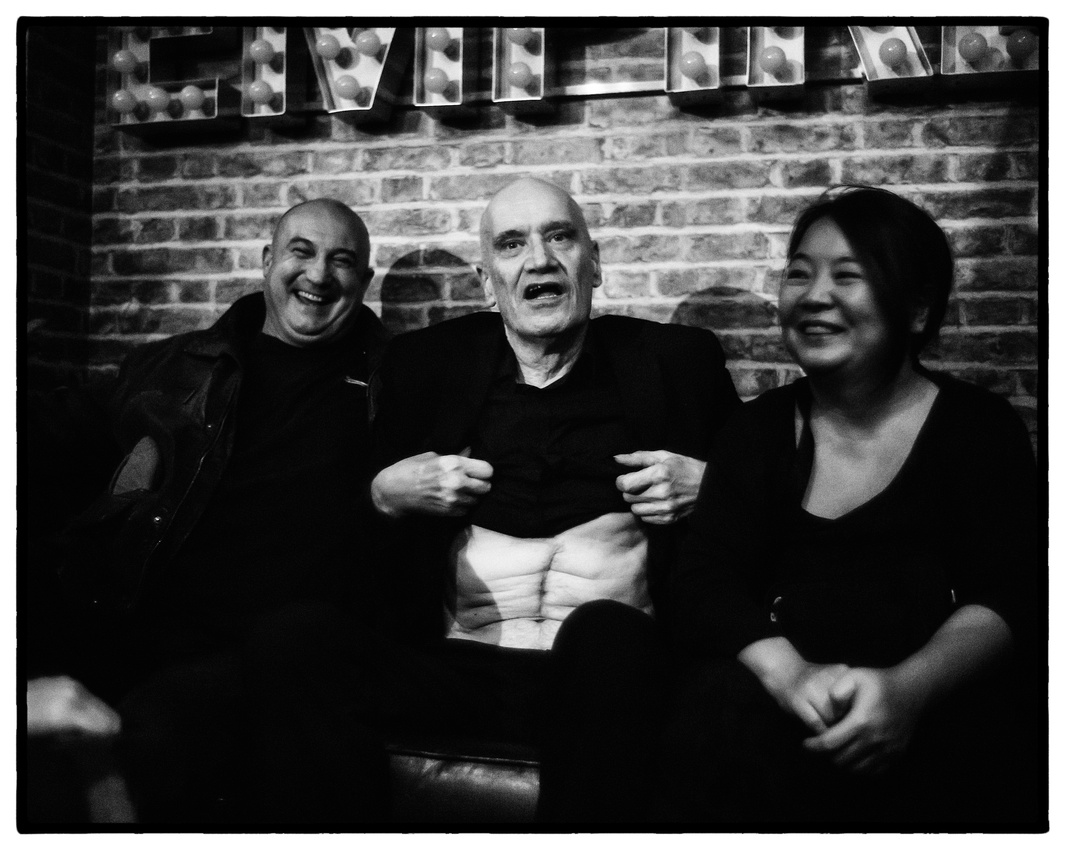 Wilko is back!Wilko Johnson is back - Shepherds Bush Empire

Thanks to my great friend, Emmanuel Huguet at Addenbrooke's Hospital in Cambridge. Wilko Johnson has been pulled back from the abyss. 9 hours of surgery and several weeks in hospital. At last, Wilko was back on stage, helping to celebrate the WHO's 50th Anniversary at a special fund raising concert for Teenage Cancer Trust on Armistice Day.

Like all the other musicians, who have given their services for free, Wilko played just one song with the great young R&B band, The Strypes. After the show, Wilko was glad to show off Emmanuel's handiwork. It has been an unbelievable journey for him over the last 18 months.  Thank you especially to all who supported him, particularly his family, former manager, Lisa Climie, Roger Daltrey, his fellow band mates, Norman Watt-Roy & Dylan Howe and his best friends, Mike Fawcett and Yuriko Daikoku. You'll see far more of him soon, according to Alan McGee, his new manager. Watch this space!

Roger Platford(non-registered)
Wonderful , can't wait to see you again .
Clive Sheridan(non-registered)
You are an inspiration Wilko. I've admired your musical prowess for decades, I was always a fan of your guitar work and songwriting with Dr. Feelgood. Now though, after reading your amazing return from certain death, I admire you as a human being. What a survivor! So glad you are still making great music. Just bought a copy of Oil City Confidential, looking forward to seeing it. And now I will start getting your back catalog too. Thanks Wilko!!!!
Ian(non-registered)
A bit of a drastic way to lose weight. Welcome back, Wilko. Glad to hear that Hugo has got a new kidney too.
Stephanie steel(non-registered)
Welcome back Wilko.
No comments posted.
Loading...
Subscribe
RSS
Recent Posts
Hi-Fi Review - TRON Antares Headphone Amplifier Cracking Sunday with the Happy Mondays The Who's Secret Weapon launched at The Half Moon... "I'm just parachuting back to life...." 2 Tone Madness Hi- Fi review - TRON Convergence Phono Stage "It feels like the last 12 months haven't happened. It feels just like normal..." If you like your music raw, bleeding raw.... Cloudscapes WHO Hits 50!
Keywords
Music Rock Indie Dr Feelgood Wilko Johnson cancer Hi-Fi Alternative Gloucester Guitarist
Archive
January February March April May June July August September October November December
© Charlie Chan
Powered by ZENFOLIO User Agreement
Cancel
Continue