Antares – “The Chief of all the Stars” 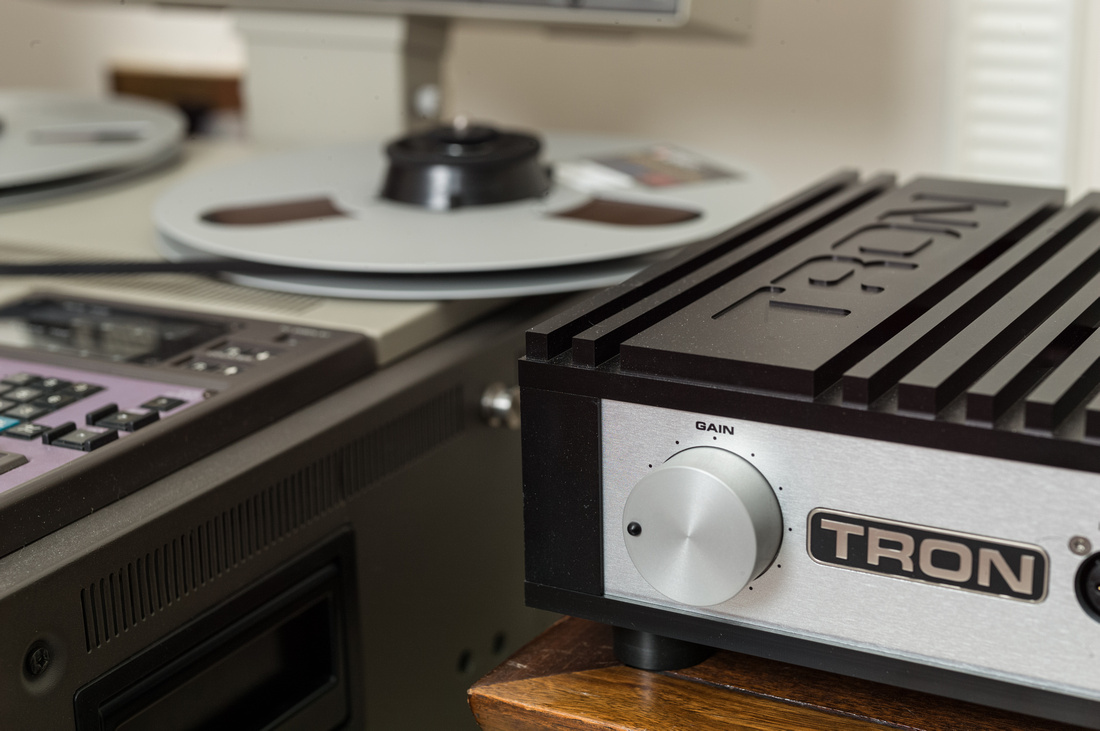 Antares is the fiery red star in the Constellation of Scorpius – a supergiant destined for nirvana as a supernova. She shines brightly in that vast firmament we call space.

Our ears place voices and instruments in space, as they blend to give us the music we enjoy. Whilst loudspeakers recreate that wall of sound, there are times when a more intimate experience is called for. Moments of isolation from the outside world - aural solitude.

Shrinking a wide acoustic vista into a microcosm is the hallmark of a great set of headphones. But exploiting this to its maximum potential requires not only excellent headphone design but also high quality dedicated electronics. In recent years, there has been an explosion in the number of headphone amplifiers, some tiny and portable, some less so.

The TRON Antares is Graham Tricker’s first headphone amplifier design. It has been almost two years in the making. This is no lightweight machine. The Antares is a full size unit and tips the scales at a massive 21 lbs. This is a hand made bespoke item. The attention to detail extends even to the “shipping carton”. It comes in no ordinary cardboard box. Instead it is supplied in a custom flight case, the choice of professional musicians and sound engineers.

Visually, the amplifier is dominated by the thick finned top plate. The TRON logo and cooling vents are CNC machined into aircraft grade aluminium. The top plate acts as a massive heatsink, vital for cooling this pure Class A unit. The appearance reminds me of one of my previous amplifiers, the sweet sounding, but ultimately fragile, 1980s vintage Musical Fidelity A1.

This new headphone amplifier is constructed upside down, with the custom circuit boards mounted directly underneath the top plate. The circuit is solid state single-ended Class A using the smallest number of components & high quality discrete transistors with the shortest signal path. This runs warm, like any true Class A amplifier.

On the front panel, there is a gain control or volume knob, sockets for up to three pairs of headphones (2 x 1/4 inch jacks, 2 x 3 pin XLRs and a 4 pin XLR) and a large on/off button backlit suitably with a red LED. The Antares will drive 2 pairs of headphones at once and can also drive a small pair of bookshelf loudspeakers.

On the back panel, there are two pairs of RCA phono sockets, one pair for source input and one pair for line out. In between the input phonos, there is a small switch to adjust the input level either to 0 dB or to minus 6 dB; this allows fine-tuning to get the best range on the volume control. Next to the IEC power socket, there is a separate audio earth lift switch, just in case you need to isolate a stubborn earth loop.

It comes in two forms, the standard Antares (£3000) reviewed here and the Antares Reference (£5000). The Reference model is distinguished visually by the silver top plate and black fascia and sides, whilst the standard version has a black top plate and sides with a silver front. Internally the Reference uses pure silver wiring throughout with a better 48 position stepped attenuator and even higher specification matched internal components.

I spent a fortnight with the Antares. Initially I wondered how I might best listen to a headphone amplifier with Sennheiser HD800S headphones and a more modest pair of AKG K550. As high quality headphones give you an experience matched only by high end amplifier and loudspeaker systems, I decided to go for the most revealing source available.

No, that does not mean a Hi-Res digital source or even my high end Platine Verdier turntable. This review was done listening to reel to reel tape. My Studer A807/II and Sony APR 5003 studio R2R machines were my chosen hardware. Software came in the form of 15 IPS 2 track ¼ inch tapes; some are original record company distribution masters, some are Tape Project releases and some are safety masters. 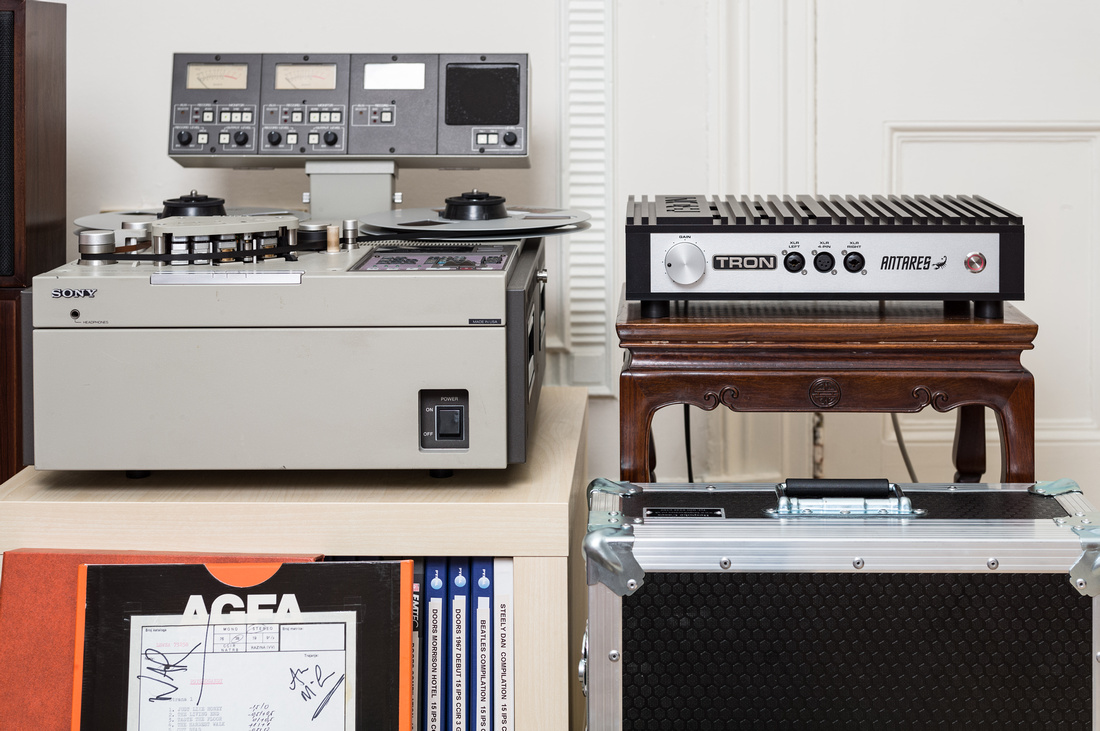 Both of the R2R machines used for this review have been calibrated and are cleaned & demagnetised regularly. The Studer A807/II cost USD12,500 in 1981 and the Sony APR5003 was the same price in 1988. Allowing for inflation and the fall in the value of Sterling, the Studer would now cost £36,000 new and the Sony over £25,000. The electronics on these professional studio mastering machines still stand up to modern day standards.

For listening purposes, I decided to compare the Antares to the direct output headphone output from the two professional R2R machines.

First up was Miles Davis Kind of Blue. My R2R tape is a safety master from the stereo Columbia CS 8163 1959 release. I play this album regularly, but perhaps not every day like Quincy Jones. I started to listen first on the direct headphone output from the Studer. The sound was easy to listen to – fat, seductive and tonally rich. Paul Chambers’ bass lines drive the music along with James Cobb’s drums. Bill Evans’ exquisite piano lines fill in between Miles’ virtuoso trumpet playing and the two sax lines from Julian Adderly and John Coltrane. Jazz heaven!

Switching to the Sony direct output changed things considerably. It sounded as if a veil had been lifted. In the “Flamenco Sketches” on side 2, it was difficult to separate all the instrumental parts on the Studer. With the Sony, suddenly I could hear the separate parts much more clearly. In addition to the more open sound, there was greater attack and more control with the Sony. The bass notes sounded overhanging and ill defined with the Studer, but the plucked bass was tighter and more dynamic with the APR5003. The Sony has a reputation for being one of the cleanest sounding R2R machines.

Moving from the Sony to the Antares, I heard a greater delicacy with the Antares. James Cobbs’ deft brush work and hi-hats in “Flamenco Sketches” were more easily heard. There was more subtlety and improved microdynamics. Although the illusion of space is different with headphones to loudspeakers, the different instruments were spread out just a bit better with the Antares.

As the Studer headphone output was markedly inferior to the Sony, the rest of the listening compared the Sony to the Antares.

Next up was an original distribution master of the seminal Jesus and Mary Chain Psychocandy album from 1985 (LP version Blanco Y Negro 240790-1). I have seen and photographed the Mary Chain on a number of occasions recently as they celebrated their 30th anniversary. “Just Like Honey” is Jim Reid’s Beach Boys pop song wrapped up in older brother William’s Velvet Underground feedback – just a fabulous song and best turned up loud. 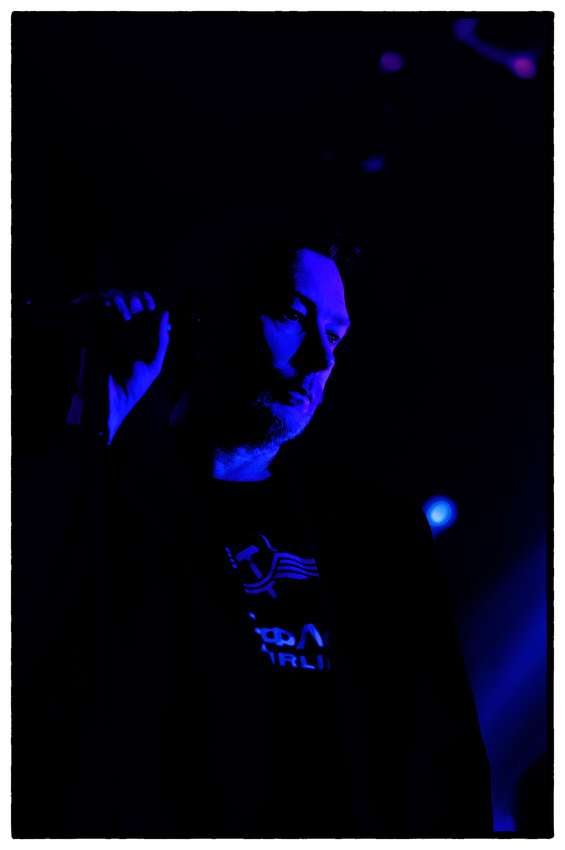 The direct output from the Sony was very good, as you might expect. Switching to the Antares made it noticeably better. There was more immediacy. The bass line on the introduction was tight, William’s guitar melody was easier to hear and there was more air around Jim’s voice. The feedback wall of sound was multi-layered with the Antares and more homogeneous with the APR5003 direct output.

Billy Joel’s 1980 live album, Songs in the Attic (LP version CBS 85273) was next. I particularly like his early songs before the success of The Stranger. “The Ballad of Billy the Kid” is one of my favourites. After that, a radio distribution tape of Pink Floyd’s “Echoes” went onto the tape deck and then the Tape Project mono release of Sonny Rollins Saxophone Colossus. 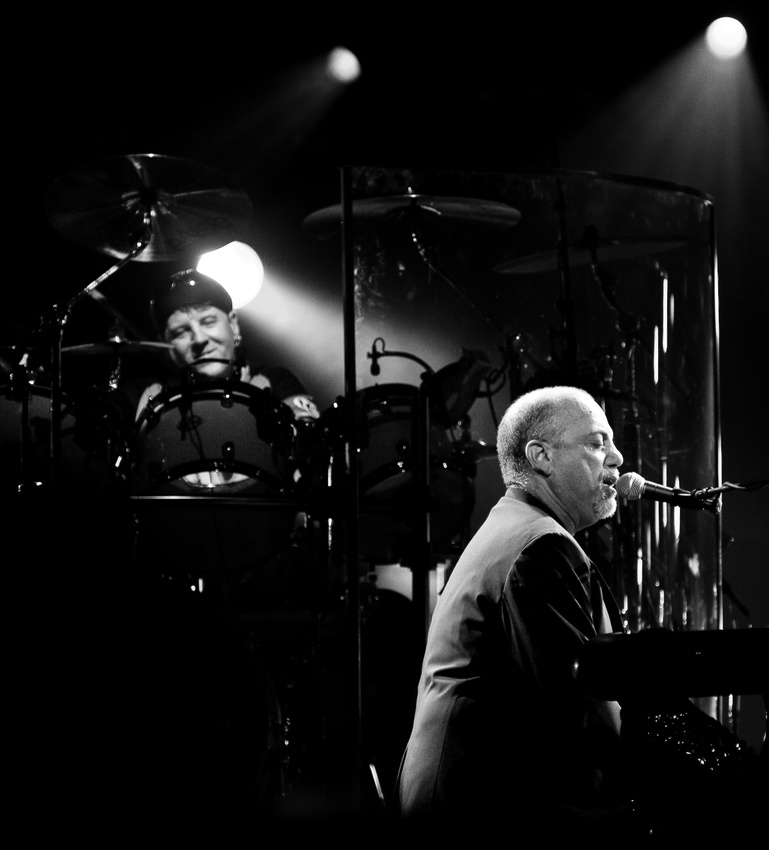 Just as before, listening direct to the Sony was truly excellent. Unless you switched to the Antares, you would be very happy with the sound through the HD800s. But the Antares just lifts it to a different level. There is more attack in Billy Joel’s piano (after all the piano is technically a percussion instrument with hammers hitting the strings) and sense of space in the wonderful Pink Floyd track from the album Meddle. 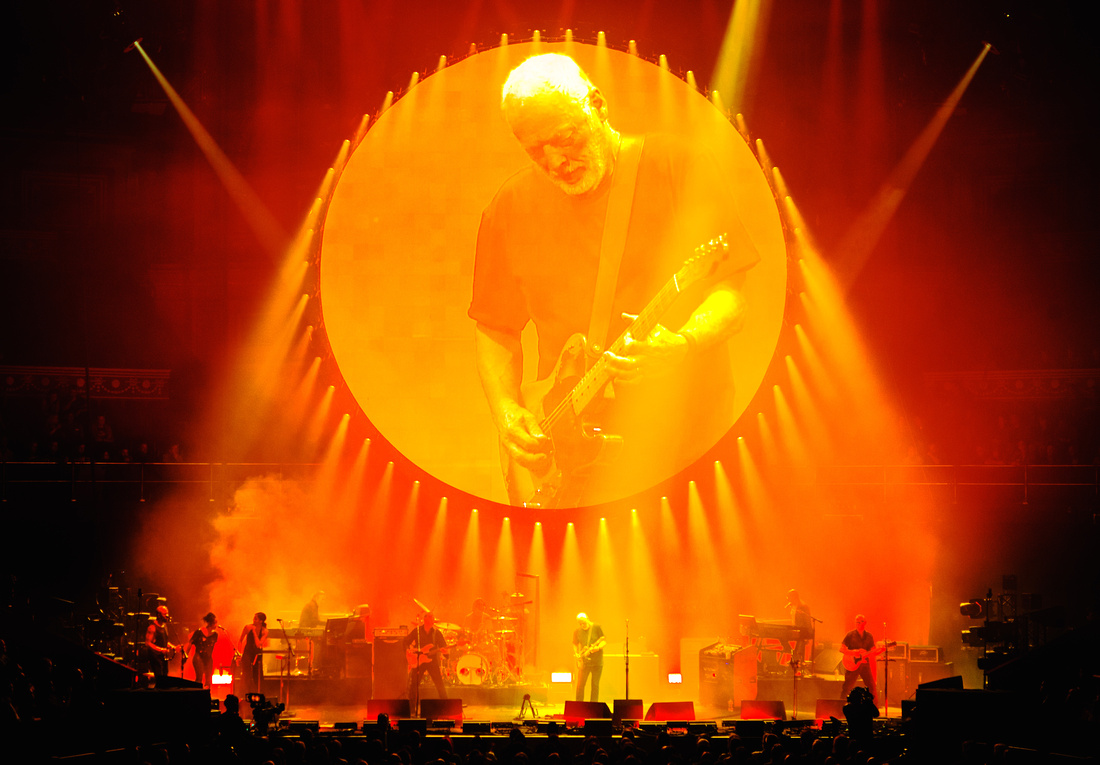 Changing musical genres produced the same results. Dame Janet Baker sang Elgar’s Sea Pictures on the 1965 EMI LP (LP version ASD 655) paired with one of Jacqueline Du Pre’s classic Elgar Cello Concerto performances. The direct output from the tape had great presence in this classic recording. The strings sound lush and Dame Janet’s voice is fabulous. Listening to the Antares separated the orchestra out, so that each of the sections could be heard separately with just a bit more air. Dame Janet’s singing stood out instead of being instead of being just part of a big broad sound. Lots of little things just made listening to the Antares noticeably better.

The Antares added directness and extra vitality to the music, even though the direct output sounded excellent. There was a subtle veil of mush from the direct output, which was imperceptible until using the separate headphone amplifier. There was an immediacy, just like live music.

The TRON Antares allowed me to hear new layers of music, which were submerged in the direct output. There was a greater sense of space, which made me want to carry on listening. I didn’t want to stop and often carried on late after midnight. Listening to the Antares was addictive and there is no better compliment than that.

The onboard electronics on the Sony APR5003 are very special. Personally I prefer the sound of the Sony to the stalwart Studer A80. The Studer A807/II is also very good, but you would not appreciate how much better the Sony is, until you make a direct comparison.

Reviewers always say that the very best transducers (headphones and loudspeakers) can be utterly revealing of poor quality recordings, source equipment and amplifiers. Using 15 IPS ¼ inch tape is the best source material, short of acquiring the original 30 IPS ½ inch stereo mix down master. Comparing a studio R2R to vinyl or digital replay is a real eye opener. Every audio enthusiast should hear high quality tape once.

So, is this something for you? Well, if you are serious about headphones and you have a high quality system, do audition it. £3000 for a headphone amplifier is a significant amount of money, but less than the cost of a top class amplifier and pair of loudspeakers. The Antares raises the level of headphone listening to a new level.

This is a unit for the head-fi addict, who is happy to indulge for hours in the quest for musical happiness. The build quality is exquisite. The sound quality of the TRON is palpably better than even the top class onboard electronics of the Sony studio tape deck.

As the Maoris say, Antares is the Chief of All the Stars. If you want to touch headphone stardom, just reach out and grasp it. You’ll like it, as it will make your music twinkle.

Other equipment used for this review

Salah Uddin(non-registered)
Positive site, where did u come up with the information on this posting? I have read a few of the articles on your website now, and I really like your style. Thanks a million and please keep up the effective work.
No comments posted.
Loading...
Subscribe
RSS
Recent Posts
Hi-Fi Review - TRON Antares Headphone Amplifier Cracking Sunday with the Happy Mondays The Who's Secret Weapon launched at The Half Moon... "I'm just parachuting back to life...." 2 Tone Madness Hi- Fi review - TRON Convergence Phono Stage "It feels like the last 12 months haven't happened. It feels just like normal..." If you like your music raw, bleeding raw.... Cloudscapes WHO Hits 50!
Keywords
Music Rock Indie Dr Feelgood Wilko Johnson cancer Hi-Fi Alternative Gloucester Guitarist
Archive
January February March April May June July August September October November December
© Charlie Chan
Powered by ZENFOLIO User Agreement
Cancel
Continue